The Pelasgoí, the forgotten people of Greece 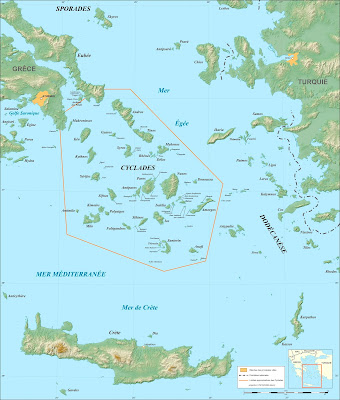 Home Page
Today, a short (pre-)history lesson about a little known people mentioned in Books 1 and 2. The Neolithic and early Bronze Age occupants of Greece, the ones that later Greeks called ‘Pelasgoí ’ (people of the sea).

It was they who first established and named many of the important southern Greek cities (Athens, Thebes, Mycenae). They survived through to the Classic Greek Age on islands and in small mainland enclaves and were described as speaking a ‘barbaric’ language (not ‘Greek’).

Greece is rocky and mountainous. Many of the choicest areas, and those easiest for transport and trade are connected to the sea. So it is no accident that the Neolithic revolution (animal husbandry and farming), arrived in Greece by island hopping across the Aegean around 7,000 BC (from Anatolia/ Turkey).

By 3,200 BC the new arrivals had established a thriving and advanced seafaring civilisation that we now call the ‘Cycladic Culture’ after the maze of small islands north of Crete. At the same time many of the cities in southern Greece (occupied since Neolithic times) showed major advances.
The larger Minoan Civilization (Crete) came about 500 years after, they also did not speak Greek (see Eteocretan below). They invented writing (linear A, not yet deciphered) and absorbed the smaller Cycladic Culture around 2,000 BC. At about this time (2,000 BC) there was a sudden economic and political decline in southern Mainland Greece which some have blamed on an invasion by the Greek speaking Mycenean Indo-Europeans, though others have pointed to the lack of widespread destruction or sudden change in culture.

This points to an important gap in our knowledge, where and when did the Greek Indo-Europeans (the ones we call 'Greeks') arrive? The current accepted theory is that Indo-Europeans (mainly nomadic pastoralists) evolved in the Great Steppe north of the Greater Caucasus Mountains and spread out overland to arrive in the Balkans/ north of Greece about 4,000 BC. Linguistic evidence has been used to suggest (Indo-European) proto-Greek speakers had settled throughout the river valleys and the few plains ( e.g. Thessaly) that can be found in Northern Greece, by around 2,200 BC.

Their arrival to the south didn’t have to be massive hordes burning everything in their path (as seen in later history). It is more likely they joined and dominated the earlier people of Greece.
For instance, in Anatolia/ Turkey the Indo-Europeans (Hittites) took something like 2,000 years from the time they arrived to when they finally absorbed and partly built upon the indigenous early Bronze Age Hattian civilization of Anatolia.

The decline in Southern Mainland Greece (2,000 BC) may have been caused by the absorption of the land starved Cycladic Culture by the larger Minoan Culture and a new focus on Crete, leaving the former mainland colonies as isolated backwaters. The takeover by the vigorous but less civilised northerners, as I said, may then have been less catastrophic than first pictured.
However it happened, when the dust settled (1600 BC) the warrior culture of the Myceneans was firmly in control, often in cities occupied since Neolithic times, and everyone was speaking the new Indo-European language.

In 1650 BC, 100 kilometres from Crete, the island of Thera exploded in one of the largest volcanic explosions in recorded history, leaving a massive Caldera, part of which is modern day Santorini. It caused a massive Tsunami that devastated the maritime Minoan empire, maybe inspiring the legend of Atlantis. The Myceneans arrived to take charge in Crete not long after that.
Links;  Pelasgians here
Pre-Greek loan words here
Etocretan, probable  Minoan language here
Illustration from  here

To see my books, check out my Amazon Author's page here or at your favourite e book store
Free Book 1: 'The Elvish Prophecy' (Click Here)

Posted by The Paladin Chronicles at 18:57