The Last King of Rome

The last King of Rome and the dawn of the Republic. 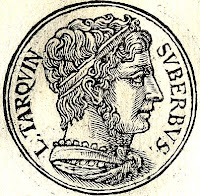 Lucius Tarquinus Superbus (Superbus meaning ‘the proud’) was the seventh and last king of Rome (reigned 335 BC-309 BC). It is not clear whether he is the son or grandson of the fifth king, also called Lucius Tarquinus, but with the epithet Priscus (‘the elder’).  After six ‘good’ kings, Superbus was said to be unmitigated villain (by his enemies).

The power in ancient Rome was always concentrated in a powerful executive with broad powers. During the ‘Monarchy’ this was the king. They were mainly appointed, and it was for life.

In Republican times consuls and magistrates were appointed by the Senate and there were various curbs on their power.

During the Roman Empire, the Emperor was proclaimed by the army (and sometimes by ‘the mob in the street’) and this was then ratified by the Senate, sometimes with a degree of coercion. Some of the Emperors managed to successfully nominate their own successor, but succession could be and often was a bloody affair.

The Senate was the second most powerful institution in Rome and reached the height of its power about mid-way through the Republic.

The Senate was a council of ‘patriarchs’(leaders) of the prominent tribes or main family groups. 'Senate’ comes from 'senex’ old man, or elder so the original term meant a council of Elders to advise the King, though it had its own customary powers and functions.

Later it included appointed magistrates (and war time leaders) still drawn (usually exclusively) from the Patrician class. During the time of the second last king, Servius, he expanded it to include less prominent families /tribes and he created a tribe for the commoners (the Plebeians).

As a result, the Senate was almost exclusively Patrician until late in the Republican with the rising power of the Plebs.

From the first, there were various people’s assemblies, presided over by a magistrate (mostly a Patrician), and at first they were limited to tribes (families/ clans) and hence they were dominated by the Patrician class.

In general, the people’s assemblies had fairly limited power until late in the Republican era when the Plebeian assembly became a focus of power and anger at the ruling class and ‘the plebs’ began demanding the right to elect their own tribunes and magistrates, judge cases and pass laws (plebiscites).

In the army, that same anger fostered the rise of military strong-men which eventually saw the end of the Republic (as discussed above).

Kings in everything but name

The first few Roman Emperors had many titles, but were at pains to portray themselves as 'Princeps Senatus', the leader of the Senate rather than the ‘king’(Latin, rex). For a long time they maintained an illusion that the Republic remained both alive and well.

Their absolute powers over government and the military meant they were kings in everything but name, and they were informally referred to as 'Basileus' (the Greek word for King). Basileus as a name for the Emperor didn't creep into official use until well into the time of the Greek -speaking Byzantine Empire.

A Tale of two women

The story of the rise of the last three (‘Etruscan’) kings of Rome begins with two clever but very different women.

The first is Tanaquil, the daughter of a powerful Etruscan family who was wife to Lucius Tarquinius Priscus. 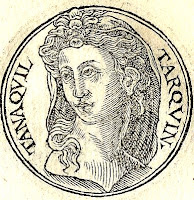 Her Etruscan name meant ‘Gift of Grace’ and on arriving in Rome, she took the name Gaia Caecilia (both from the Etruscan word for ‘happy’ and probably referring to her marriage to Priscus).

She was regarded as the model of womanly virtue, skilled in the domestic arts, particularly spinning and weaving, and credited with the origin of various Roman wedding customs. After her death, she was deified as a Goddess of healing and womanly virtue.

Early Romans, like many others, venerated their ancestors who were considered immortal, so maybe deification might not have been such a  big step as it sounds. Maybe it resembled the veneration of a saint in some respects. (After all , Vesta was the main Goddess of the hearth).

Anyway, in addition to the above qualities, Tanaquil was educated in healing and the Etruscan arts of augury and prophecy. Because her husband had a Greek father, he couldn’t gain office amongst the Etruscans, and she convinced him to move to Rome.

Legend has it that on his arrival, an eagle took his cap, flew away and then returned it back upon his head which Tanaquil interpreted as an omen of his future greatness.

The king himself noticed her husband and appointed him as the guardian of his own sons. After the King’s death, Tarquin addressed the people’s assembly and convinced them to elect him as king.

When he was assassinated (by the sons of the previous King during a staged riot), Tanaquil pretended he was still alive and appointed Servius Tullius, (another Etruscan) from her household, as regent. This allowed Servius Tullius to become king.

Tanaquil backed this up with tales of previous omens that she had ‘kept secret’, and she later allowed him to marry her daughter.

It was not uncommon in early Roman times for women to take a feminised version of their father’s (or
husband’s) name. As a result, two of Servius Tullius’s daughters are only known as ‘Tullia major’ (the eldest, married to Lucius Tarquinius Superbus) and ‘Tullia Minor’ (married to his brother Arruns).

The younger sister was fierce and ambitious and was said to have conspired with Tarquin to murder Tullia Major and Arruns, so they could marry each other instead. She then encouraged her new husband to usurp Servius’s (her father’s) throne. When he had enough support, Superbus surrounded himself with armed men and sat on the throne, summoning the senators.

Servius hurried to confront him but the younger man flung him down the steps into the street and then had him set upon. As Tullia minor was driving home, she saw her father dying in the street and seized the reins from her chariot driver and spurred her horse and chariot over her father's corpse, spattering her dress with his blood.

Tarquin refused to bury the Servius, and then put to death a number of leading senators, whom he suspected of remaining loyal to the dead king. He continued to rule without the senate, judging capital crimes himself which lead men to fear opposing him.

Some of his (other) more infamous deeds include:

1.      hiding swords in the house of one of his opponents and then accusing him at a meeting of Latin leaders of a plot to kill him. The swords were found and the accused man was executed by placing him in a deep well and putting a wooden frame on his head and throwing stones on top of the frame until he drowned.

2.      When he couldn’t conquer a Latin town,  Gabii, he got his son, Sextus to submit to flogging and then go there complaining of mistreatment by his father. Sextus was soon a leading citizen with command of the army. He sent a messenger to his father to inquire how he should deliver the city into his hands. The king, who was walking in his garden made no reply, but kept striking off the heads of the tallest poppies with his stick. Sextus took the hint, and put to death, or banished on false charges, all the leading men of Gabii, after which he had no difficulty in compelling the city to submit.

Talk about the tall poppy syndrome!

Superbus sacked several cities , bringing the wealth back to Rome to fund various building projects. It is said that when the populace became disenchanted with the cost, he again turned to conquest, this time Ardea, 35 kilometres to the south of Rome.

During the siege, it is said, that the bored young noblemen began drinking and comparing their wives.

Secret visits found that it was  Sextus’s cousin's wife, Lucretia, who was the most beautiful and the most dutiful. Struck by her beauty, Sextus returned to rape her with threats.

She later confessed what happened to her husband and then suicided. The (patrician) people’s assembly was called, and for this and other excesses, Tarquin’s ‘imperium’ was revoked. He was to be exiled and twin consuls appointed to rule Rome (with an election each year to limit their power).

When word of the uprising reached the king, he abandoned Ardea, and sought support from his Etruscan and Latin allies to march on Rome. Several attempts by him to regain his throne resulted in desperate battles. The most famous one was the assault by the Etruscan king Lars Porsena which led to the heroic deeds of Publius Horatius Cocles defending the bridge across the Tiber, allowing the Romans to retreat and the bridge be destroyed behind him.

Sextus was murdered by fellow Latins, and Superbus eventually went into exile in the Greek colony, Cumae, south of Rome.

But is this really what happened ?

“The victor will always be the judge, and the vanquished the accused”.

an oft repeated adage, paraphrased by  Hermann Göring at his Nuremburg trial

As mentioned in the last blog, we have no written record of this time. For hundreds of years the only versions available were colourful tales often told by professional story tellers.

Adding to this, the victorious senators would have been keen to besmirch the reputation of the last king, as far as they could. All those who later gained power in the new Republic would hardly be interested in rehabilitating his reputation. Despite all this, Superbus hardly seems pure and innocent.

At the very least, he suppressed  the Senate. He likely murdered opponents. Of course this was the sharper edge of politics at the time. In a similar way, as soon as he was displaced, the rebels began killing his supporters for 'treason'.

Were the previous kings so much better?

Priscus was assassinated, partly by a mob led by the sons of the previous king.

And if Servius was such a great and popular king, how could he be so easily displaced, to die in the streets, alone and friendless, abandoned even by his own servants, and then driven over by his own daughter?

Some Patricians were involved in the plots to unseat the last three kings. Ambition had to play a part in this. Perhaps Superbus bypassing the Senate challenged powerful Patrician factions.

Furthermore, while I am not an expert,  I don't think it would be easy for Tulia to get her horses to trample a corpse lying in the streets. And if Lucius Tarquinus Superbus secretly hid swords in the house of an opponent to frame him, how do we find this out (if it was a secret)?

Lastly,  Lucius Tarquinus Superbus didn’t seem to lack friends in his attempts to retake his throne, maybe he wasn’t as unpopular as we have been led to believe.

As much as we all love the legend of Horatius holding the bridge (with two others and then alone when they were injured) it was very unlikely. The Etruscans knew about bows and arrows and it was said that he swam back to safety in full armour while arrows were falling all around him.

There is also doubt as to whether the Etruscan king, Lars Porsena was acting for Superbus in his attack on Rome and maybe he wasn't beaten back. In one version he briefly occupied Rome. 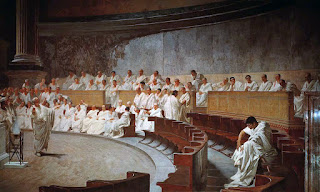 Whatever really happened , this was a fight between the king and the senate and in this case the senate won. It was the end of the Roman kings and affected politics in Rome for many hundreds of years to come.

I hope you have enjoyed this blog, to see my novels, please check out my Amazon Authors page here or at your favourite e-book store.

Subscribe to my blog  here
Home Page home page
Posted by The Paladin Chronicles at 19:26